Reason for meeting :- Cotswold Homes are in the process of purchasing the land known as Duke’s Field. The land is designated as DA_2 (10 dwellings) in the CDC Local Plan 2011-31. A meeting was requested by the Parish Council to obtain some understanding of the proposed timescales, layout of the development, and to allay some of the concerns of nearby residents.

This initial meeting was to establish contact between CH and DAPC and not to convey approval or disapproval of the proposed development.  This would require a full Parish Council meeting.

LR said that timescales aimed for are to submit detailed planning application in Dec 2020, and being on site to start building in the summer of 2021. The application would be for 10 houses. GT stated that this timescale was very ambitious with the amount of work to be carried out and submitted in effect three weeks. Studies had to be carried out on, for example, on development site ground levels, boundaries, maybe an archaeological study, Highways approval on entrances, Thames Water approval on sewerage and surface water effect. 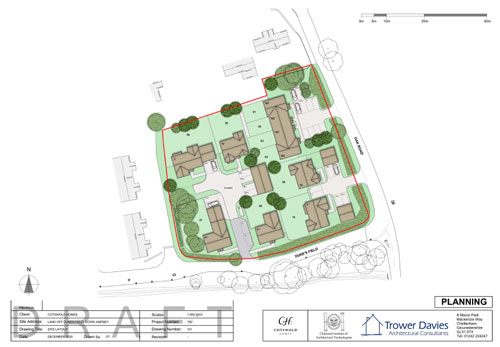 An initial proofing layout was shown by LR which indicated two road access points on Oak Road and one on to Duke’s Field. There was doubt from RJ that two access points would be allowed by Highways on to Oak Road. GC said Duke’s Field access point was at a narrow point on the road. There should be no access from the development onto the gravel track in front of existing Duke’s Field houses.

Construction of the buildings would be in Cotswold Natural stone with roof tiles being Rosemary roof tiles as seen in 55 Down Ampney Rd. RJ stated this was not the preferred roof tile of the village and recommended the artificial version of Cotswold tile, welsh blue slate or if standard tiles are to be considered they should be sand finishes not plain smooth.

Parking is always an issue and layout consists of two parking places in addition to garage parking for the four bedroom houses. DA would also prefer a minimum of two off street parking spaces for each of the affordable housing. GC had concerns about visitor parking area as Duke’s Field was very narrow and certainly was not suitable for “overflow” parking from the development. LR would review the parking situation, and look to provide visitor parking within the development. GC also mentioned that the current Duke’s Field estate has restrictions on parking in Duke’ Field

Visitors parking for those houses with access off Oak Road should be considered to ensure that Oak Road does not become a car park.

GT pointed out that there were severe problems in the village over sewerage capacity and surface water. LR said discussions were ongoing with Thames Water and probably surface water retention schemes would have to be installed. The plan was to let the surface water go in to the ditch the other side of Duke’s Field but concerns were raised by RJ that these ditches did not go anywhere.

When asked about the sustainability credentials for the site LR said we believe the fabric first approach allows for simple changes considering design, construction and building fabric of a home to produce an efficient and low energy building. The building fabric you can make smart choice as to which materials you use, to make sure the homes needs as little energy as possible all year round. When asked about heat pumps and rainwater harvesting LR stated they will not be looking to use these systems, but they are considering PV panels though.

LR asked who owned the field opposite Oak Road as they would like to rent an area for construction site office and stockade for materials. RJ gave a contact name at Bignalls.

Owing to the very short time until planned submission in mid Dec it will be difficult to circulate “final” designs to Duke’s Field and The Pheasantry residents and receive back comments.

As soon as LR had “near final” layout he would send to RJ, GT and GC to circulate to residents and Parish Council for comments.

RJ thanked LR for the meeting and looked forward to a further pre-application meeting in the near future.